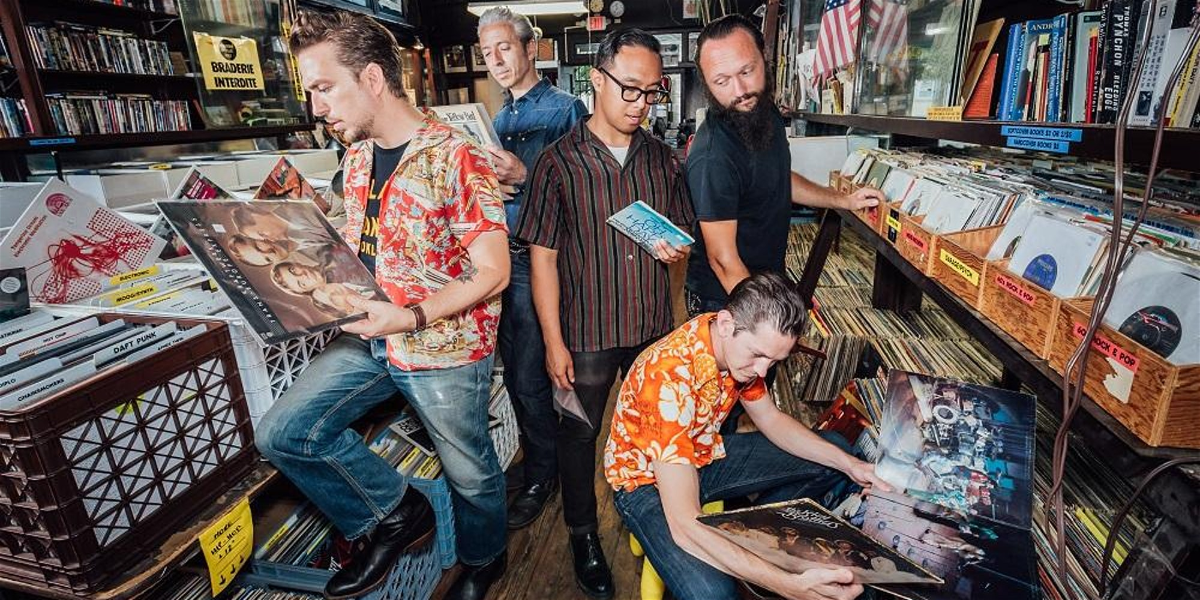 You could mistake JD McPherson for a revivalist, given how few other contemporary artists are likely to assert, as he boldly does, that “’Keep a Knockin’ by Little Richard is the best record ever made. It’s so insanely visceral, you feel like it’s going to explode your speakers. If I’m listening to that in the car, I find myself having to brake suddenly. I can listen to that and it makes me feel like I’m 20 feet tall. And the feeling of joy I get from that record is always going to be the real push behind trying to make music.”

But in a very real sense, McPherson is much more a pioneer than roots resuscitator. He’s knocking at the door of something that arguably hasn’t yet been accomplished—a spirited, almost spiritual hybrid that brings the forgotten lessons from the earliest days of rock & roll into a future that has room for the modernities of studio technique and 21st century singer/songwriter idiosyncrasies that Richard Penniman would not recognize. Let the Good Times Roll, his second album, is a stranger, and more personal affair than its Fats Domino-redolent title might at first suggest, but the name isn’t exactly ironic, either. If you, too, brake for pleasure, you’ll screech to a halt at the enrapturing sound of these Good Times.

His first album, 2012’s Signs & Signifiers, was hailed as “an utterly irresistible, slicked-back triumph” by Mojo and “a rockin’, bluesy, forward-thinking gold mine that subtly breaks the conventions of most vintage rock projects” by All Music Guide. The Washington Post wrote that, “he and his bandmates are great musicians taking ownership of a sound, not just mimicking one.” That same review remarked upon how, “the album sounds as if the band is in the same room with the listener.” But for the follow-up, McPherson wanted to maintain that raw power while also capturing the more mysterious side of the records he loves. To that slightly spookier end, he enlisted as a collaborator Mark Neill, known for his work as a producer and engineer with versed-in-the-past acts going back to the Paladins in the 1980s, but, most recently, for recording The Black Keys and Dan Auerbach—a friend of McPherson’s who co-wrote the new album’s “Bridge Builder.”

Talking up one of the freshly minted tunes, “Bridge Builder,” McPherson describes it as being “the psychedelic Coasters.” That no such thing really existed prior to this album doesn’t deter him. “This is something I actually talked about with Mark at the beginning of the record: ‘I want to make a ‘50s psychedelic record!’”

Neill was up to meeting that seemingly oxymoronic challenge. “It’s still a rock & roll record, but the borders are expanding a little bit,” McPherson explains. “With some of the writing that came out this time, it became apparent the songs weren’t going to lend themselves well to our usual process. So as we sought out a producer, we took aim for a slightly wider—I guess hi-fi is the word—sound, and got more experimental. Mark Neill certainly has all the tools in his hardware shop with which to produce any range of sounds from vintage Capitol Records stuff on up to…gosh, we listened to so much David Bowie making this record. We’d play Primal Scream’s Screamadelica to listen to how they suddenly started making dance records, and then Mark would play us Marilyn McCoo singing ‘Marry Me, Bill’ over and over again, I guess trying to re-wire our brains.”

Amid this flurry of possible influences, a few production approaches stuck. “I find that the records that I like to listen to over and over again are the ones that have those strange engineering choices, or weird sounds. I was very attracted to the idea of using plate reverb. So whereas the first record was really informed by New Orleans rhythm and blues, where everything was very dry and up-front, I really was listening more this time to a ton of Link Wray, and the Allen Toussaint-produced Irma Thomas stuff, and all the early ‘60s rock & roll that is saturated in plate reverb.”

McPherson certainly doesn’t begrudge the attention that Signs & Signifiers unexpectedly brought him. “If it hadn’t been for the ‘North Side Gal’ video, this probably never would have caught on,” he says, recalling the fame he found on YouTube even before Rounder picked up his indie release. “That’s how we found our label and found our management. I was still teaching school, and here I am with got this video that’s like a million hits. I’m like, what? I had no plans to quit my job. Luckily, I lost it.” A middle school art department’s loss was Rounder’s and the rock world’s gain.

It’d been a while in coming. “I started getting obsessed with this stuff when I was in high school,” McPherson says. “There wasn’t much to do where I grew up in rural southeast Oklahoma, where I lived on a 160-acre cattle ranch.” When he discovered early rock & roll and R&B, “it was like finding a treasure no one else knew about. Nobody around me had any interest whatsoever in Little Richard except for me and my friend. Once we started listening to Jerry Lee Lewis, and to Screamin’ Jay Hawkins, which was the best thing you could ever find, everything started to change. I’ve got a videotape of us playing at a pool hall in the early ‘90s in Talihina, Oklahoma, and it’s cowboys and criminals and people that are cooking meth up in the hills standing around playing pool, and here we are with our greaser uniforms on, playing Buddy Holly’s ‘Rockin’ Around with Ollie Vee’ followed by ‘Clampdown’ by the Clash, and all these people are really confused. Those were happy times.”

The covers and the grease got dropped along the way to adulthood, of course, even though he knows what he does now is likely to wind up with some inaccurate revival tags. “There’s never going to be a point where I’m not going to hear the word ‘rockabilly’,” he says with a laugh and a sigh, “even though it’s not anthropologically correct, because it’s separate from rhythm & blues and rock & roll. Not being able to be perceived as how you sort of define what you’re doing is frustrating, but you just have to understand that not everybody is a nerd about this stuff. What it comes down to is that you can’t expect for people to listen if you’re not doing something personal. I mean, you can’t just do covers of Johnny Burnette Trio songs, because that idea has already been expressed, and it was actually moved past pretty quickly.
Rock & roll music changed really quickly when it started becoming ubiquitous youth music and the President’s sister started doing the Twist. Yet there’s something intrinsically valuable about a lot of those ideas that haven’t fully been explored yet. And you take everything you love about it and write personal music and hope it translates into its own thing. I always hear ‘Man, bringing this stuff back is really important,’ but I have goal to bring rock & roll back in some reactionary way to battle something else. I want it to just kind of nudge it into its own little place alongside what’s happening now.”

Since the debut album came out, McPherson has played for a lot of those aforementioned genre nerds who pick up on every single influence. But he and his band have also opened for acts ranging from Bob Seger (getting a standing ovation at an arena in Detroit, the headliner’s hometown) to the Dave Matthews Band to Nick Lowe to Eric Church (who sought him out to write some songs together). For a Halloween night 2014 show at the Forum in L.A., super-fan Josh Homme, one of McPherson’s biggest supporters, handpicked him to open for Queens of the Stone Age. These may not all seem like natural pairings, but the music is primal and melodic enough that, after a few minutes, it never fails to make sense even to audiences with the least of expectations and musical educations.

“Man, people may not even know it, but they all like that stuff,” McPherson declares. “I’ve seen it happen over and over again. You’re in a record store where they’re playing some weird underground amorphous electronic record that has no configurable beat per minute, and then they put on a Sam Cooke record, and everybody is just like ‘Ohhh’— like a weight lifted. All kinds of music are interesting, but man, there’s something about the 1/4/5, 12-bar blues form that’s just hard-wired into American brains. And I shouldn’t say just American brains, because this stuff is still really huge in Europe, too. Everybody likes rock & roll. They just either won’t admit it or don’t know it yet,” he laughs, unshakable in his faith that the whole world is or will be on a roll.